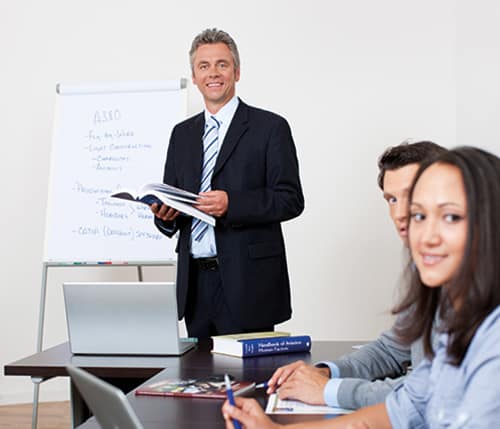 Educating far beyond the books

While lectures and textbooks are crucial components of education, the faculty at Embry-Riddle’s Europe campus leverage their real-world experience, showing students how to apply knowledge beyond the classroom. Each dedicated member of our faculty is passionate about the aviation and aeronautics fields and has experience in academia, a range of professional roles and research positions. They regularly meet with industry leaders to ensure they are teaching what’s being demanded in the workplace. They are eager to share their experiences with you and help you achieve your academic and professional goals.

Read our faculty bios for detailed backgrounds on our dedicated team.

END_OF_DOCUMENT_TOKEN_TO_BE_REPLACED

Assistant Professor of Aeronautics, Dr. Christian Berth received his Ph.D. in Mechanical Sciences from Berlin Institute of Technology in 2010. He also holds a Master's degree in Aeronautical Sciences.

Dr. Berth serves the Embry-Riddle Worldwide's Berlin Campus since 2009. Dr. Berth holds a U.S. Pilot License and has accumulated about 1,000 hours as a student instructor on Airbus A330/340, A320 and Boeing 777 certified Full Flight Simulators.

In addition to his academic career, he serves the Federal Ministry of Defense. Working for several Directorates -- including “Department of Future Analysis,” “Mission Command Staff,” and “Political Directorate Berlin” -- his responsibilities include research, staff, leadership, and military instructor positions.

END_OF_DOCUMENT_TOKEN_TO_BE_REPLACED

Accomplished and dedicated, Dr. Norbert Lohl was appointed as Certification Director of the European Aviation Safety Agency (EASA) of the European Union (E.U.), a counterpart to the Federal Aviation Administration (FAA) in the U.S. on 1 Jan. 2004.

Dr. Lohl is responsible for the Type Certification of all aeronautical products in the E.U., including airplanes, helicopters, engines, parts, and appliances.

From 1998 to 2003, before joining EASA, Dr. Lohl worked in various Senior Management functions, including Head of Administration Department and Head of Commercial Operators Department, and as Deputy of the President of the German Federal Aviation Office Luftfahrt-Bundesamt (LBA). In 1993 Dr. Lohl became the Manager Engine Type Certification of the LBA.

After the German reunification in 1990, Dr. Lohl became the Manager of the newly created Regional Office in Berlin, taking over the former East German Aviation Administration.

After finalizing his University studies in Physics from 1969 to 1974 and passing a clerkship in Aeronautics between 1974 and 1976, he joined the German Aeronautical Research Centre (DFVLR/DLR) and worked as an expert for flight guidance and navigation systems. He wrote his dissertation and received his doctorate degree in Engineering from the Technical University of Braunschweig, Germany, in 1982.

END_OF_DOCUMENT_TOKEN_TO_BE_REPLACED

Dr. Elmar M. Giemulla is a German and U.S. lawyer who specializes in aviation law and policy. He has authored several books and numerous treatises on different aspects of aviation law, such as liability in air transport, international and E.U. air law, and aviation security law. He lectures on these areas as honorary professor at Berlin University of Technology.

After the breakup of the Soviet Union in 1991, Dr. Giemulla advised the Russian and a number of other CIS states on the restructuring of their aviation systems, including the complete legal framework and the separation of operative and supervisory tasks. Since 2009, he has assisted the Afghan government in the establishment of a Civil Aviation Authority and the training of qualified aviation personnel.

After finalizing his University studies in law from 1969 to 1974 and passing a clerkship in legal practice between 1974 and 1976, he joined the Federal University of Public Administration and lectured there on administrative and aviation law. He wrote his dissertation and received his doctorate degree in Law from Cologne University in 1979. In 1990, he passed the New York state bar examination and was admitted as an attorney-at-law.

END_OF_DOCUMENT_TOKEN_TO_BE_REPLACED

Dr. Hans-Joachim Ruff-Stahl, an Assistant Professor of Aeronautics, received his Ph.D. in Cultural Sciences from Humboldt University of Berlin. Prior to that, he graduated from the Media and Communications doctoral program at the European Graduate School in Switzerland. He also holds two Master's degrees — one in Strategic Studies from the Air War College at Air University and a Master of Aeronautical Science from Embry-Riddle. Dr. Ruff-Stahl was accepted into the Master's program at Embry-Riddle with a Bachelor of Science equivalent after graduating from the Officer's School of the Luftwaffe and Euro-NATO Joint Jet Pilot Training.

His professional experiences include leadership, staff, and research positions in Germany and in the United States. Presently, he serves at the Ministry of Defense within the Political Directorate in Berlin. Beyond teaching at Embry-Riddle, Dr. Ruff-Stahl has lectured at Hochschule Wildau and was an external Ph.D. thesis supervisor at the School of Engineering at City University London. His human factors and strategy-oriented research interest centers on the question of why organizations that consist of highly intelligent individuals make bad strategic decisions.

END_OF_DOCUMENT_TOKEN_TO_BE_REPLACED

Born in Berlin, Germany, Dr. Robert A. Goehlich has been an assistant professor at Embry-Riddle Worldwide's Berlin Campus since 2009. He received his doctoral degree in Economics (Dr. rer. pol.) at the European Business School (Oestrich-Winkel, Germany) in 2008. Dr. Goehlich studied Aerospace Engineering at the Technical University Berlin from 1996 to 2000 and received his doctoral degree in Engineering (Dr.-Ing.) in 2003.

Since 2006, he has developed or managed various projects at a leading aerospace company. From 2003 to 2005, Dr. Goehlich created and lectured the world’s first “Space Tourism” Master’s and Ph.D. courses as a visiting professor at Keio University (Yokohama, Japan). He was also involved in JAXA’s Future Space Transportation System Team concerning cost optimization and in NASA’s “Moon, Mars and beyond” vision concerning “Economic Development of Space” project.

He has done research stays and consulting in the fields of jet engines, reusable launch vehicles, and space tourism at the Israel Institute of Technology (Haifa, Israel), at the University of Washington (Seattle, U.S.), at the National Aerospace Laboratory (Tokyo, Japan), and at EADS Space (Kourou Spaceport, French Guiana).

Kerstin Alicki
Embry-Riddle Aeronautical University
Kurfürstenstraße 56
Berlin, Germany 10785
+49 (0)30 53063549
europe@erau.edu
This website uses cookies and similar tools and technologies to understand visitors’ experiences. By continuing to use this website, you consent to Embry-Riddle Aeronautical University’s use of cookies and similar technologies, in accordance with the Embry-Riddle Privacy Statement.